Like an old dog with one good trick, The Eastern is, and have always been, a band built to play. In whatever combination we've shown up in over their 15-year history, we've tried to stand our ground for all comers and have seen every table as something to stand on and every moment standing on said tables as one where we could be singing. Traditionalists in the most rock n roll sense, we don’t have much truck with the future but we believe deeply in the moment, right here, right now.

Right here, right now in terms of playing living, breathing, original music especially for a living is a pretty wonky time; covid burning, cost of living growing, etc. etc. ad infinitum. But we see the world in a strange way, and we know musicians always get the big sympathy and the big empathy (all though we often try and tell you different).

As a touring band who’ve played everywhere in New Zealand and almost everywhere beyond, one thing us brothers and sisters of The Eastern have realized, is that musicians are often the least important part of the process. The infrastructures, eco systems and communities from which they spring are as crucial to the whole shebang as oxygen is to everyday humans. You might be King turd on top of poop mountain but without the air your breathing, or the bar to play in you ain’t nothing.

With that in mind and with all things considered, maybe before the next pandemic, weather bomb, burning sky, wraith of vengeful gods or until every stage gets choked with a Fleetwood mac tribute band, your 37th favourite bunch of folk singers thought we could, this spring, wield whatever swing our aching aging elbows could muster in service; to the bars, original music and maybe a little more for some food banks just for good measure and a little extra virtue signaling.

we called in some pals and decided to go on tour, in one city, for one night only over six nights!

Six tribute nights, but not tributes to millionaire rock stars, a tribute to the bars that probably won’t grow a single rock star between them but will still open every night, to young chancers, long haulers and true believers alike. A tribute to the communion of a shared experience of songs you don’t know played by people who have to play them anyway, like it matters and is truly important. A tribute to the people serving the drinks, making the speakers go and a tribute to the resilience of those doing it tough this winter, this year, this forever, by offering some food, non-perishable household items, sanitary products whatever! To help take the edge off and the sting out of it all maybe for just one meal or one day or whatever. A tribute to being in this together.

Oh! and a tribute to the audiences, we see y’all out there forking out $70 and more a ticket for the big shows and we know that’s pretty tough if you’re on minimum wage or trying to feed your kids, so come get busy with us we’re making it just $5 a ticket (with an item of the aforementioned can or something similar), to get you out.

It sounds mental and everyone’s gonna lose money but damn if doing it for the money doesn’t make doing it, just that little bit worse. There’ll be plenty of time to jack the price up to keep us in our mansions. This one however is on us, with just enough to pay the sound people and the folks doing the door.

Whether we sell one ticket or all of them, we’re proud to be from and for The Barlands.

It’s gonna be everything we can make it be, starting off At A Rolling Stone this August and ending in November with a big celebration just behind the cathedral on a big stage outside of OGB with local hero Jordan Luck putting the exclamation point where the full stop should go. There’s different line ups at every gig, and more to announce. We’d be thrilled if you could join us in The Barlands or at least help spread the word! We’re on your side thanks for being on ours!

with all these folks right here:

AND MORE TO COME! 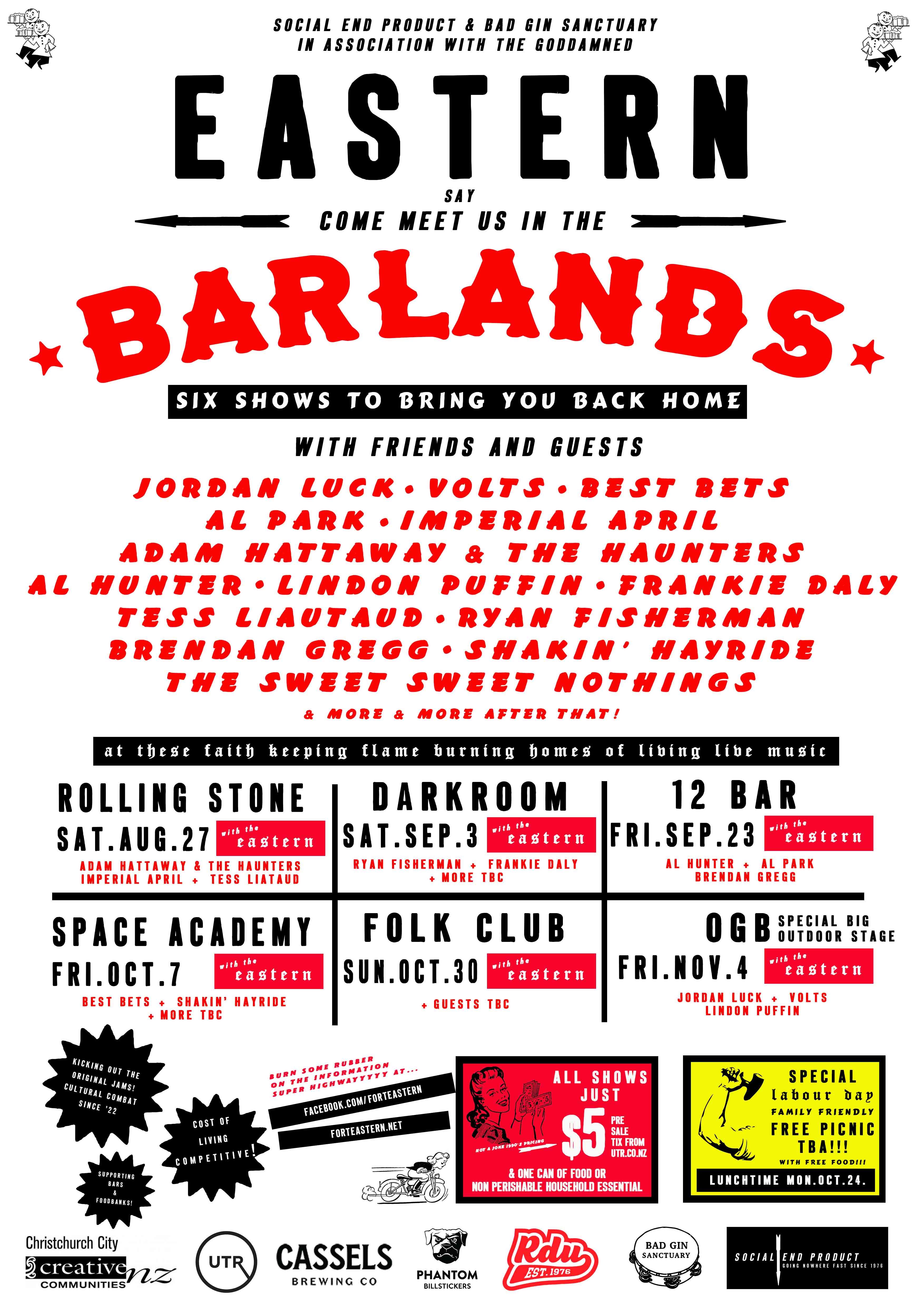 MORE INFO TO COME BUT IT'S GONNA BE A GRAND COUPLE OF MONTHS...

McGrath's solo tour continues next week New Plymouth, Rotorua, Levin, Palmerston North, Whanganui with auckland and Balcairn still to come and The Eastern in Ophir and Queenstown after that! and announcing soon The Eastern in Taupo, Gisborne, Napier, Hastings, and Auckland!